Knighting Projects are often part of the sixth grade experience in Waldorf Schools, as part of our study of Medieval European History. The squire-to-knight transformation gives a framework for a rite-of-passage for 12 and 13 year olds.

Starting in late January, the Summerfield sixth graders are asked to find tasks or projects to take up over the spring, in order to develop a quality they want to strengthen in themselves. This quality might be compassion, generosity, perseverance, organization, or responsibility. They write up their project proposals on parchment paper using illuminated capitals in calligraphy. The student, parents, and teacher then agree upon and sign the documents. In class, the students learn simple book-making skills and create paper or leather bound journals. Throughout their quest, these journals become their faithful companions. In them, they both record their activities and reflect on what they notice about themselves. Projects start in March, and each week, students hand their journals in to their class teacher.

I found that most of the students had recorded their activities regularly, but reflecting was only happening for a few. I talked with the class about how important it was to write down reflections of what they noticed was changing (or not) in themselves, as this was the way they could decide if the tasks were helping them make progress in developing their chosen virtues, or if something needed to be adjusted.

It became clear that the projects that were working best were the ones with accountability to the outside. Projects such as doing extra chores at home often stalled out. But those tasks that could be either experienced by someone outside the home, or with a measurable outcome or deadline, were actually happening. At this point, I spoke with some of the students about revising their tasks. If their projects weren’t working as well, we found them new projects to pursue.

The Knighting Project ends with a Knighting Ceremony. At this ceremony, the students witness a solemn ritual with their class teacher and families. All  are dressed in Medieval court attire. The squires, as the students are called at this point, wear simple tunics and tabards emblazoned with a coat-of-arms design they have made, with symbols to inspire their ongoing development.

Their teacher, as their sovereign, then asks the court, “who has guided and cherished this young squire on their path to knighthood?” And their parents or guardians answer: “Tis I, Lady ___ / Lord ___.” Then the sovereign asks, “and who will speak to the character of this squire?” And a fellow classmate answers, “I, Squire ___, will speak.” and does so. The squire then gives a speech about what they set out to do, what happened, and what they learned. Students are asked to use a metaphor or simile to describe a part of their Knighting Project. This enlivens their speeches and helps them to crystalize what they learned during this journey.

Then, with sword in hand, the sovereign touches the blade to each shoulder and then the head of the kneeling quire, and proclaims, “I dub thee Knight ____.” The knight bows their head, and the sovereign blesses them by placing a simple medallion pendant around their neck.

After everyone is knighted, the class speaks their Knighting Oath together. 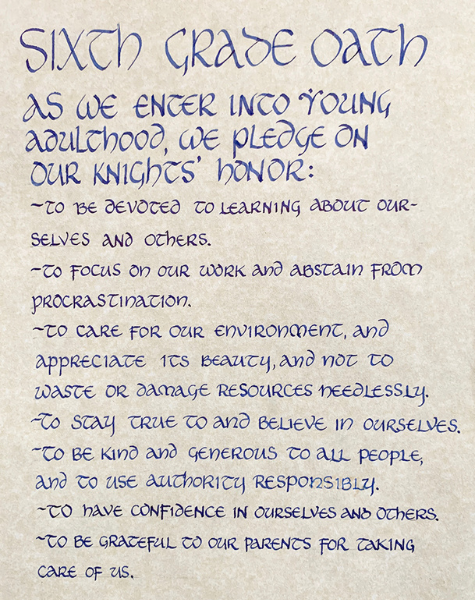 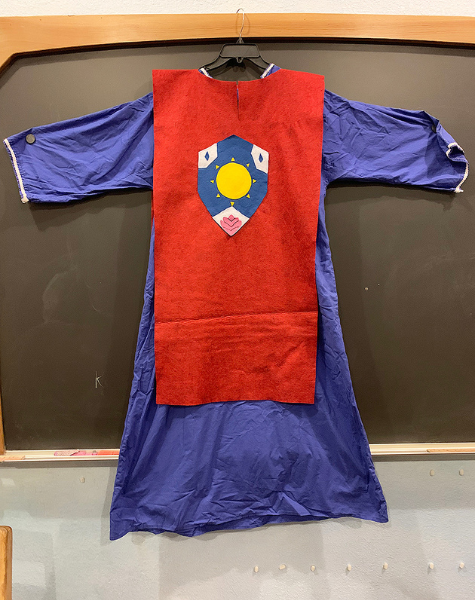 The work on their Knighting Oath begins in the final weeks of the project. The class discusses what is important to themselves, both now and in the future – as an 8th grader, 12 grader, and into their adulthood. Students work in small groups and write down their thoughts. The students read over the ideas that another group comes up with, discussing and adding to them.

When I asked them each to reflect on which part of their oath would be most challenging for them to uphold, their reflections became clear. Right away they wrote what would be hard to: respect and accept other’s beliefs and views; have confidence in themselves and others; believe in and stay true to themselves; not talk about others behind their backs; and stay hopeful and positive even when things are difficult. But they wanted to do these things, and they were willing to try!

This exercise in self-reflection is a rite of passage. The key that I hoped for them to find is that, once they have realized something about themselves, that meant there was movement, or something changed, even if they didn’t do everything they set out to do.

At the same time, if there was something they said they would do but didn’t do, that needs to be acknowledged. So that they can take the next step. People can develop the will to overcome what is hard for them, but we need to become interested in, and compassionately aware of, the parts of ourselves that are avoiding things.

The Knighting Ceremony itself is often a time of vulnerability. It is not a performance, like a play is, but an honest and humbling experience. Although some students find a new key to themselves and are excited, many still feel around for what they are ready to take on. It may not be a ‘shining’ moment for every student, and that is tender.

This is the second group of sixth graders I have had the honor of guiding through a Knighting Ceremony. I have been grateful for the time we have spent as a class. We have reflected on how we learn, asked each other what is important to us, and made a common commitment to how we wish to be together and in the world.

As a class, we have dug a deep well together. And as it filled with water, we can now see reflected our challenges transformed into self-knowledge. This well of the shared experiences of grappling with our projects will undeniably become a source we can all draw upon in the stormy seas and tempestuous times to come.